A Few Words About Allan 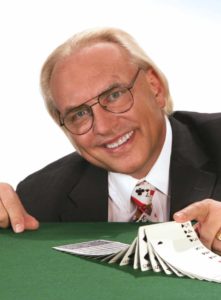 Allan is a Las Vegas-based sleight of hand artist, entertainer, and educator.

He has been studying magic since childhood and has a passion for engaging and amazing his audience.  He specializes in doing effects with cards, coins, and everyday objects.  He is the creator of over 250 magical effects, the author of four books, twelve sets of lecture notes, and over twenty DVDs.  Allan has performed in USA, Mexico, England, France, Italy, and Germany.  He has worked with U.S.O., performed on the Las Vegas strip, done tradeshows, TV, and over 300 shows at the famed Hollywood Magic Castle.

When Allan was 18 he started studying under Ed Marlo, who is considered by many magicians the greatest sleight of hand artist with cards of all time.  He studied with Ed until January of 1970 when he went into the USAF.  When he got out of the service in 1973, he decided that he would concentrate only on close-up magic and in particular card magic.  He would get a masters degree in mathematics to help with his shuffle work.  Microcomputers came out in 1973-74 and he jumped on the bandwagon with shuffle simulators and gaming simulations.  Those three disciplines have remained the loves of his life to this day.

Allan taught at UNLV and the College of Southern Nevada for 34 years teaching mathematics and computer science.  He is often a keynote speaker at math conventions lecturing on using the art of amazement to inspire students to learn mathematics.   Allan retired from the College of Southern Nevada in the summer of 2017, but he will never stop creating and performing his first love – magic.